Things to do in Istria – 7 Waterfalls Path

Speaking of Istrian hidden gems, 7 Waterfalls Path is one of the most popular and most beautiful. When you google the trail, you may find different descriptions in terms of length, or the level of difficulty. In some places it says the path is 13 kilometers, in the others 17 kilometers. Some say it’s easy enough for beginners, others that it’s difficult and requires climbing experience… but even if they don’t agree on the details, they all agree that it’s absolutely beautiful and a must see in Istria.

For us, on that lovely mid-november saturday, the GPS said we did 17 kilometers in about 5 hours and the path was ok for all of us in the group, with average physical fitness. It was even ok for the 9-year old husky Boni and 3-months old kitten Terry, even though she needed to take naps in the backpack. 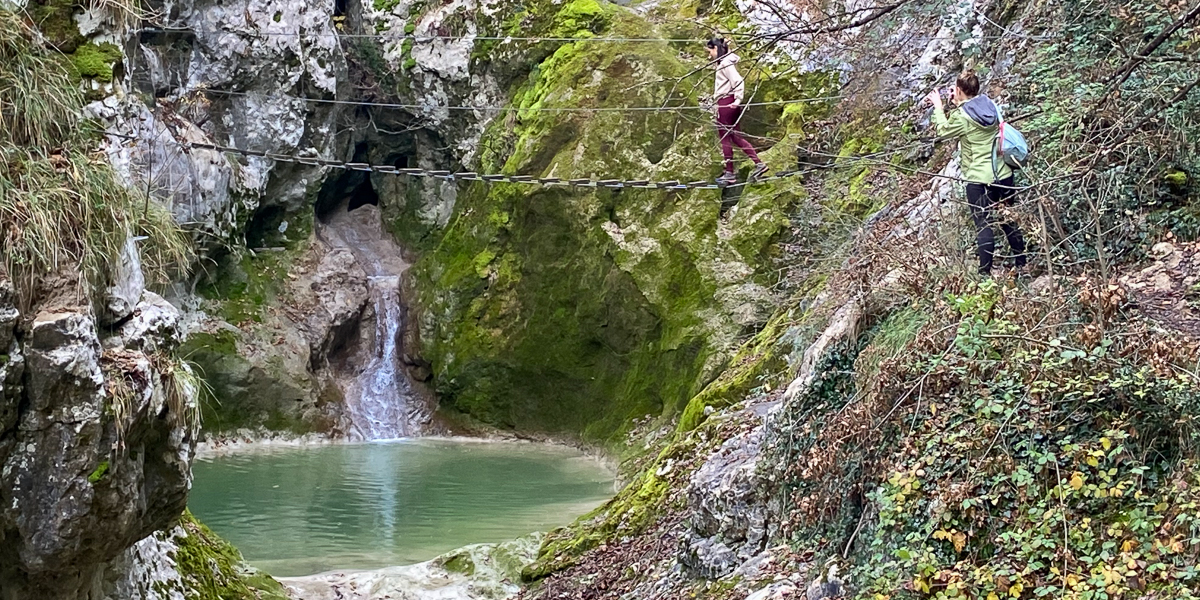 The seven waterfalls path is a circular hiking trail which begins on the edge of the city of Buzet. Look for the Buzet brewery, and after you pass it you can start looking for the parking place, as the path starts by the nearby bridge on the river Mirna. You will not see a sign that points you in the direction of the path, but you are in the right place, just follow the walkway on the river banks.

You can walk the trail on either side of the river as it will take you back on the opposite side. But, our suggestion is to take the left side (or the one closer to the brewery) as there is one steep climb after the third waterfall, and in our opinion, it’s easier to go up on that part than down.

After you pass the banks of the river Mirna, the path takes you through the lovely forest and soon you’ll reach the first waterfall Zagon, which is 5 meters high. On this part of the trail, the first 4 waterfalls are quite near each other, so it takes you between 6 to 25 minutes to walk to the next one. But that’s only if you are not taking a million photos like we did :). The second waterfall is called Bačva (the Barrel). Even though it’s “only” 8.8 meters high, it’s one of the most attractive ones for the photo shoot, thanks to the small suspended bridge above the 12 meter wide pond. Also, near the trail you can see the old mining shafts, which are interesting to explore. The shafts were made in 1854. but were exploited only for several months because there was not enough coal to be worth digging.

The third waterfall Vela Peć is also the highest one on the path, 26.5 meters. Now it’s time for the “difficult part”. On this part of the trail it’s important to have good shoes that will not slip on the wet rocks and ground. Between the third and fourth waterfall there is a steep climb partially secured with fixed ropes and metal steps to make the climb easier. After the ascent you’ll come out to a wider path. If you go left, you’ll continue the path to the fourth waterfall Mala Peć, where you’ll find a perfect picnic area. But if you feel tired for the day and want to make a shorter tour without visiting all 7 waterfalls, go, after the climb, to the right and the path will take you towards the end of the trail and the 7th waterfall Grjok. 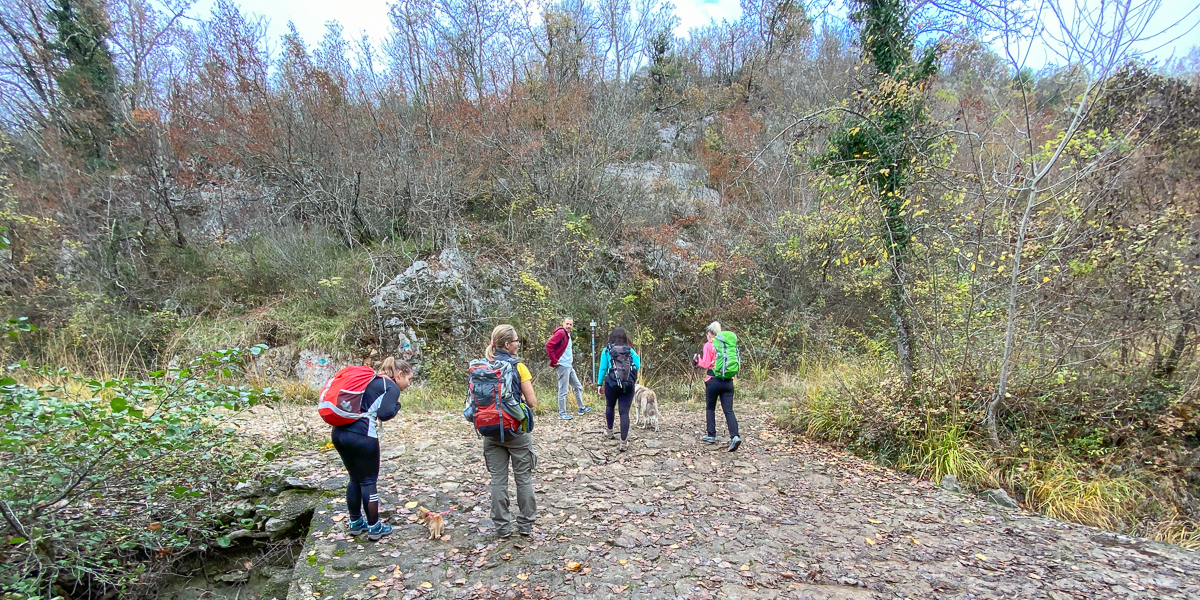 Kotli and the second part of the path

After you have a rest at Mala Peć, it takes over an hour of walking to reach the next waterfall at the village of Kotli. The path will take you through villages, some uninhabited ones too, and over the Napoleons bridge. The tiny village of Kotle is a very popular place for excursions, due to the beautiful waterfall and the old watermill next to it. Here you can make a longer break at the restaurant and enjoy some local food specialties, wine and spirits. Many people choose Kotle for just a short walk because you can get there by car and still enjoy the beauty of the waterfalls walking on the wider, easier walking path.

On this part of the path we met people walking in their regular city clothing and footwear, even higher heels, which would not be appropriate for the rest of the trail. For this part, they said, it’s ok, but they did notice, the city footwear was not the most comfortable on the rough macadam.

On our way back to Buzet, we had still 2 waterfalls to visit, the Zelenšćak, and the seventh Grjok with the wonderful wide pond. All 7 waterfalls are special and beautiful, but the adventure is not over yet. From here it’s still about a 40 minutes walk to get back to our starting point. 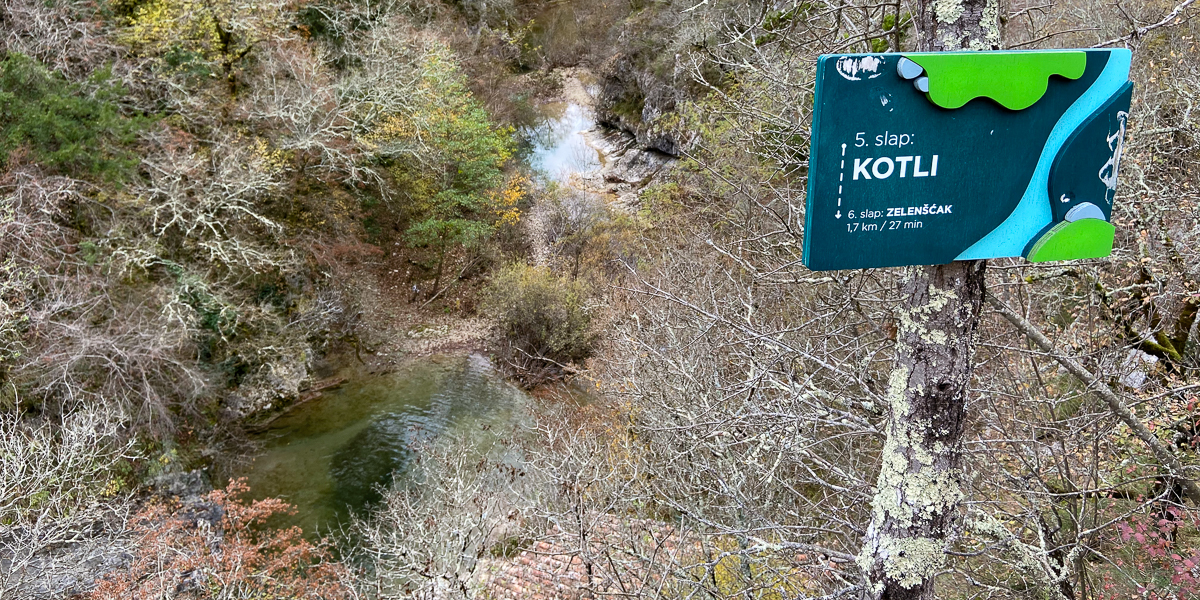 The beauty and excitement is more to come, as you need to cross the river Mirna in 3 places.  The crossings are made of rock boulders and you need to walk over them. If the water is high it can be quite challenging or even wet 🙂 . Last part of the trail takes you through a small canyon where you can see rock climbers of the cliffs and again along the banks of the river Mirna back to the car.

All in all, it was a beautiful day outdoors and after 5 hours of walking it was perfect time to have pizza in Buzet (we didn’t eat at Kotle as the restaurant was pretty full), depart from our friends and drive our separate ways back home. 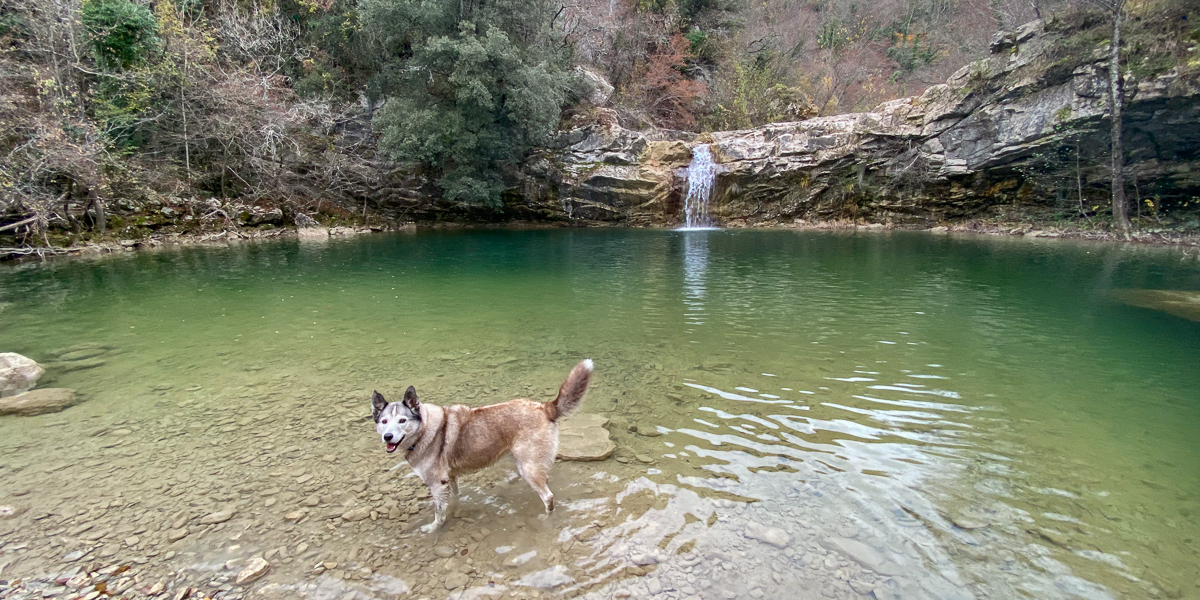 If you’re planning your private trip to anywhere in Istria and need a recommendation, feel free to contact us 😉

The beauty of Snorkeling Previous Article Coasteering in Croatia Next Article