Things to do in Istria – Stjepan Hauser’s Path

Istria offers you many undiscovered beautiful paths and Stjepan Hauser’s path in Rakalj is definitely one you should put on your “to do“ list. The board at the beginning of the trail says it all: “Between that Rakalj village and that cold water from the Kalavojna cove, along the cove Luka to the cape of St. Mikula stretches the trail of Stjepan Hauser. 5 kilometer long trail through which you will see the most beautiful coves of Istria, find a hidden beach just for yourself and enjoy the aromatic smells of spruce, sage and immortelle… and maybe, if you are lucky, you can meet Stjepan Hauser too.“

In case you haven’t heard about Stjepan Hauser, it’s good to know that he’s a world famous cello player (2 Cellos), who’s hometown is Rakalj, and he likes to take walks along the trail and contemplate music and concerts. 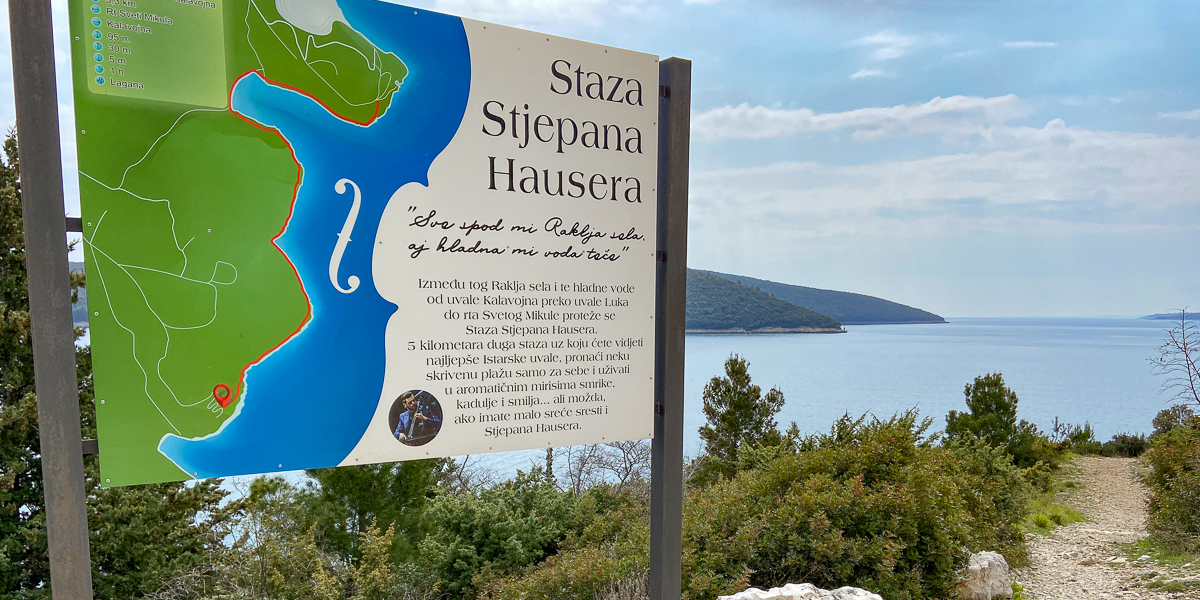 Rakalj is a small village on the east coast of Istria, located above the Raša bay. If you are driving from Pula, you need to drive in the direction of Labin. After you pass the village Marčana, the next right turn takes you to Krnica and Rakalj. In the village Rakalj, you will not find any signs taking you to the trail. But, it’s easy, just follow the main road through the village and after you pass it, take a left turn following the signs to Sveti Nikola and St. Agnes chapel. If you’re in doubt, stop and ask around.

The road then takes you downhill towards the sea. Before you reach sea level you will see the remains of an old Rachelle citadel (Stari Rakalj, abandoned in the 16th century). You can park there and have a look around at the remains, and the preserved chapel of St. Agnes. From the citadel you can enjoy the magnificent views of the southeast Istria, Koromačno and Raša bays, islands of Cres and Lošinj. 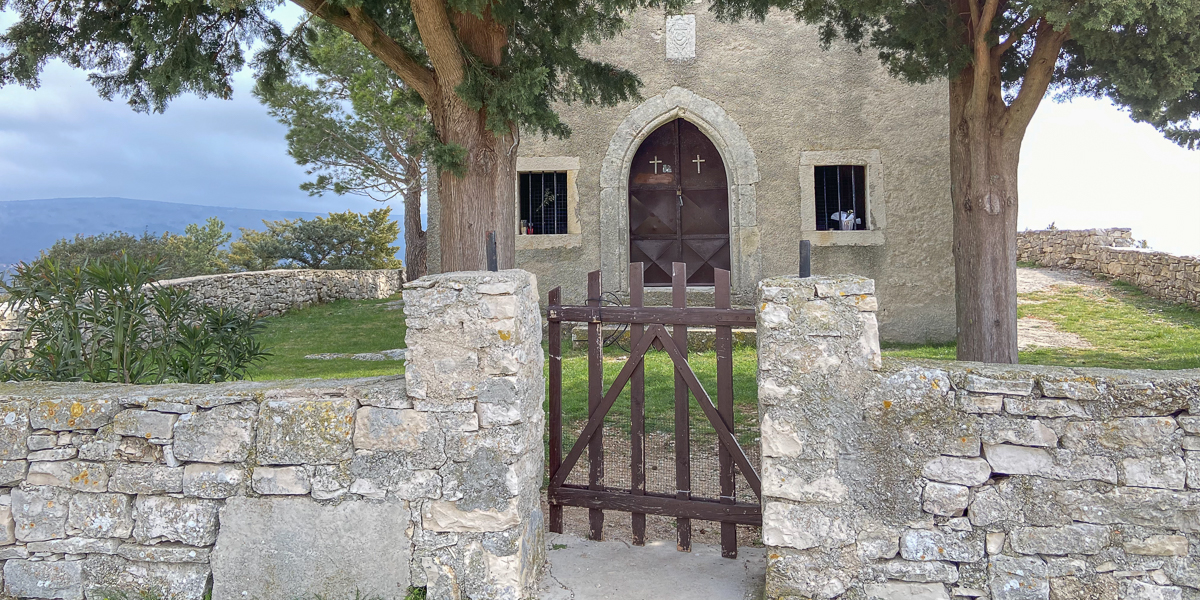 From here you can start your descent on foot, or by car following the road next to the old quarry. When you see the lighthouse on the cape of St. Nikola, you are just a few steps away from the trail, following the right hand side direction.

The path has been officially named and opened in August 2017. It’s not marked along the way, but after you pass the starting point sign board, you really don’t need markings like the mountain hiking trails, because there’s only one path and chances to get lost are none. It stretches 5 kilometers from the cape of St. Nikola (St. Nicolas), along the coastline of the Raša bay to the Kalavojna cove. 5 kilometers doesn’t sound very long, but you still need to get back the same way, so the trail is actually, there and back, 10 kilometers.

It’s suited for everyone who desires a light walk surrounded by nature’s beauty. We took a walk, with our pets, on a nice warm early spring sunday and there were plenty of hikers, even families with small children. Although it’s suited for mountain bikes too, it may be a bit difficult to navigate a bike due to the amount of hikers. 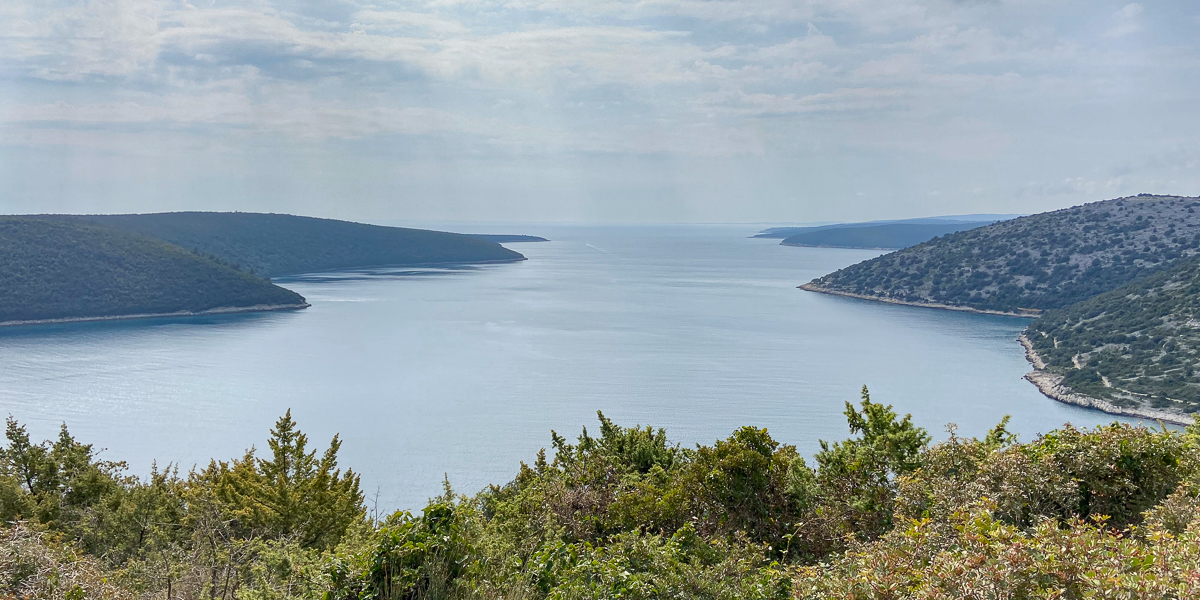 Walking the trail you can come to understand why Hauser decided to take walks here. It’s perfectly calm, only sounds of the sea and the birds, and pure nature everywhere you look. The first thing that will catch your eye in the Luka cove is the old ship wreck. That pile of rust is now the most photographed part of the trail. After you pass the pebbled beach Luka, the trail takes you along the steep coast above the turquoise waters which are just inviting to jump in. 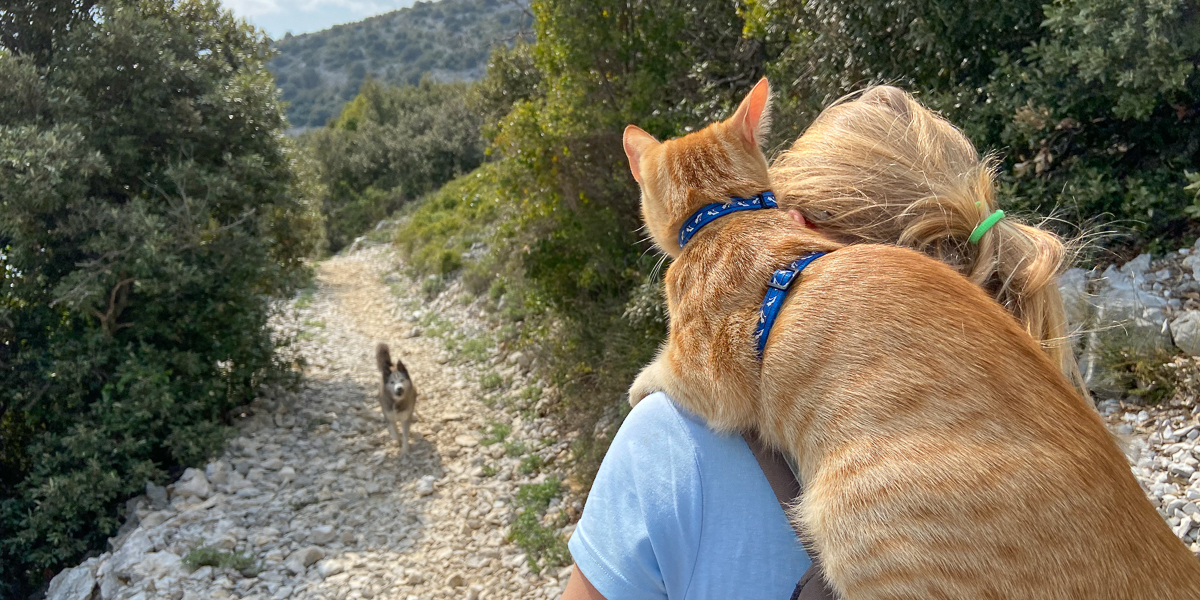 Parts of the trail have very little shade, so, even on an early spring day, with no breeze, it got quite warm. So, Boni, our husky-mix, couldn’t wait to get to Kalavojna and take a cooling swim in the sea. On the way back, even the cat had her tongue sticking out while trying to cool down, so in the summer it’s probably not the best idea to try to walk the trail without stopping for a refreshing swim.

While Luka cove is secluded, uninhabited, Kalavojna cove is a different story. Remember, after the village of Rakalj you take a left turn to reach the start of the trail. But, if you take the right turn, the road will take you down to Kalavojna. There are some houses and mobile homes next to the beach, boats in the cove and it’s the favorite beach for the locals and their guests. 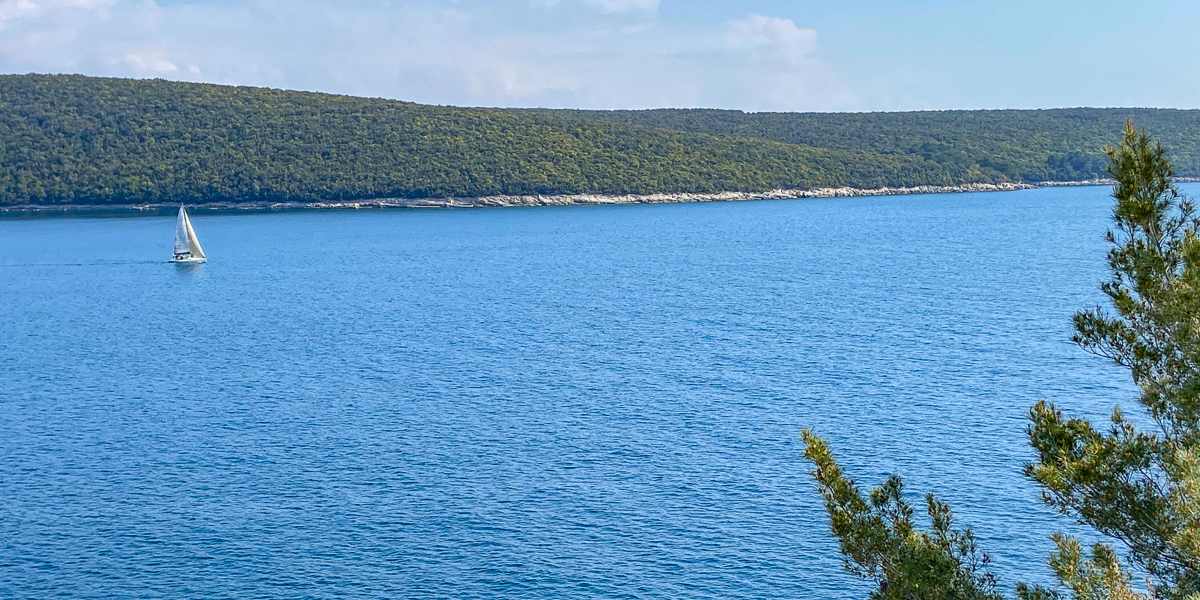 We didn’t get lucky to meet Stjepan Hauser along the path, but it wasn’t less beautiful because of that. It was a perfect way to spend a half day in nature. We’ll most certainly take the trail again, maybe next time from the sea side with kayaks or SUP boards. If you’d like to join us, feel free to drop us a message and follow on Instagram and Facebook for more updates!